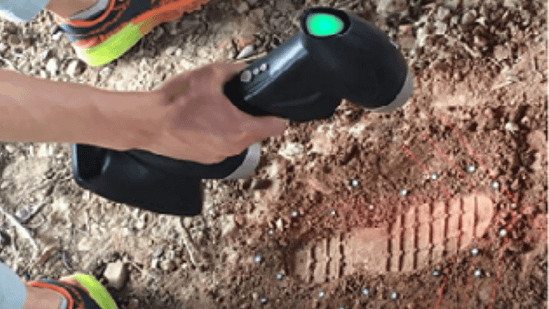 3D scanner can Forensic science has been a valuable ally to law enforcement for decades. With the astounding new advances in science and technology, that link has grown even more substantial. And those in the field are beginning to understand the applications and benefits of 3D scanning for forensics.

The criminal justice system relies heavily on forensic science. Forensic scientists study and evaluate evidence from crime scenes and other locations. Evidence helps prosecutors to arrive at objective conclusions that can aid in the investigation. Notably its evidence that helps to subsequently convict a guilty party or clear an innocent person of a crime.

Any object that might link a suspect to a crime or a crime scene is considered forensic evidence, regardless of size. Officers must find and gather any physical evidence left at a crime scene and a certified technician must subsequently evaluate that evidence to determine its relevance in the case. Of course, the integrity of the physical evidence must be preserved, so the proper management of evidence is a crucial part of forensic science.

Police, forensic technicians, attorneys, and others in the legal field are utilising 3D scanners for capturing and preserving evidence. They must understand the applications, benefits, and limitations of how 3D scanning technology collects data and can subsequently be used to help investigate evidence and crime scenes.

But first, all officers present at a crime scene should safeguard and secure the site, and this means that the scene must be preserved in its entirety. After the crime scene has been secured, the whole area should be recorded.

Professionals should photograph each item of evidence, and its location should be measured and documented before any aspect is handled, removed or studied.

The acquisition, evaluation, and analysis of evidence must be the first steps in every forensic inquiry. In general, the higher the quality of the evidence, the better the analysis and possibilities of successfully resolving the issue. Because of this, new tools, equipment, and software are released regularly to assist forensic technicians in gathering, organising, and analysing evidence.

Various technologies can be used to collect evidence. There are also other technologies used to organise evidence. However, fewer technologies can gather, organise, and analyse all in one package. This is why 3D laser scanning for forensics is becoming a more popular and valuable application of laser-based measuring technologies in the fight against crime and reconstructing events.

The capacity to digitally reproduce a crime scene is the 3D scanner’s most significant benefit. Investigators are using 3D laser scanning technology to accurately show the relational element of each piece of evidence, allowing them to recreate and reconstruct crime scenes.

A computerised duplicate of the crime scene may be made using a 3D scanner. Users may measure distances between objects, build scenes, and see them from various angles. 3D scans allow analysts to gather accurate dimensions, facts and attributes that can be recorded and analysed later.

A more detailed 3D scan may be performed along with the overall picture, concentrating on specific items or evidence such as footprints. As previously said, the evidence must be secured by authorities against modifications. A 3D scanner can take and preserve a footprint in real-time for further study. Footprint collecting and analysis is one of the most common investigative techniques used by police.

Conventional footprint extraction employs a plaster mould casting method. There are several drawbacks to using this method. Plaster mold casting typically takes more than half an hour. If the extraction fails, not only will no footprint be accessible, but the footprint data on the scene would be lost. 3D scanners, on the other hand, can swiftly scan footprints while leaving the original morphology intact.

When a comprehensive 3D scan of the area is combined with specific scans, 3D laser scanners may restore the crime scene to courtrooms as it was. Hundreds of thousands of point measurements may be taken each second using 3D scanners.

As a result, the time savings and possibilities offered with a 3D scanner would be almost unachievable with more traditional approaches. Consequently, accident and crime scenes may now be provided a quarter of the time and with many more measurements than previously.

We’ve examined how 3D laser scan point clouds may be utilised to visualise a situation. This gives prosecutors many viewpoints on the crime scene. They may, however, also be used to reproduce human bodies.

Authorities who employ 3D Laser Scanning can use it to accurately model a human body. When it comes to violent crimes, bodies give authorities a plethora of information. Often a body can be the most central evidence in a case. Thus, 3D scanning of human bodies may be the biggest breakthrough in forensic technology.

It may not be the whole body that a forensics professional needs to capture. Small details, such as the shape and size of scars, body parts or wounds may be significant evidence in a crime scene, as can the form of blood spatter.

Artists already utilise 3D scanners to accurately generate digital models of the human body. During 3D scanning, the scanner collects photos to portray the shape and colouring with detailed accuracy. They can also be helpful in forensic medicine and crime scene documentation.

3D laser scanning is gaining popularity and is becoming increasingly widespread in law enforcement. The system’s hardware and software became easier to operate, more precise over time, and even more helpful.

3D scanners are lightweight and portable. This means that the scanner can quickly scan the crime scene and capture data without harming any evidence. The 3D scanner may produce the entire scene. Data such as measurements on the digital scene are reasonably simple to collect.

In essence, 3D Scanners are low-cost, quick-to-create instruments for producing real-time representations of crime scenes and evidence. And forensics is reaping the benefits of the latest in crime scene technology.

Trevilla Engineering is a privately owned and operated Australian Engineering Company, established in 2011. We specialise in innovative solutions and bring ideas to life.

Our Engineers service clients nationally and provide Engineering Consulting to a broad range of industries. Our team also solves under-resourcing issues and manages work overflow for other Engineering firms.